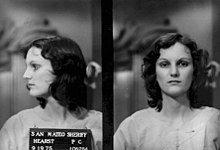 She had come up from the underground with an improbable grin – a self-described “urban guerrilla” with a defiant clenched-fist salute. But when Patricia Hearst retured to the San Francisco Federal courthouse last week to petition for her freedom, she was backed up by her family, a phalanx of nine lawyers and all the resources of the formidable Hearst wealth.

From a suitcase of clothes her father, Randolph Hearst, brought her, she had chosen a red sweater-blouse and chic navy-blue slacks. Never giving her family so much as a glance, she sat stony-faced while defense counsel Terence (Kayo) Hallinan presented Chief Federal District Judge Oliver J. Carter with a five-page affidavit protesting her innocence – a sometimes lurid, sometimes compelling document contending that physical and mental abuse by the “criminal gang” of the Symbionese Liberation Army had driven her mad. The affidavit was laced with a number of discrepancies (box, page 38), and Patty herself undermined its torture-and-brainwash tale in a taped jailhouse conversation, telling an old school chum she wasn’t talking candidly to anyone and adding that her politics “are real different from, ah, way back when.”

Still, the affidavit stated the heart of the defense case: that Patty had been temporarily insane since her kidnapping in February 1974, and therefore could not be judged for what she was accused of doing. What remained to be seen – among other things – was whether Patty herself would play out her lawyers’ scenario.

The Others: Her SLA comrades were dead or jailed – William and Emily Harris whisked off for a separate trial in Los Angeles, Wendy Yoshimura under arraignment for a 1972 Berkeley bomb plot and the house painter Steven Soliah – Patty’s latter-day lover – charged with harboring her as a fugitive in his apartment. But a shadowy new group of SLA associates was now being sought, and police were probing Patty’s possible connection with a small wave of recent California crimes – a bank robbery in which a woman was murdered, the bombing of a police car and the murders of a Los Angeles cop and a friend of Sara Jane Moore, the woman accused of last week’s Presidential assassination attempt.

If Patty had indeed participated in such crimes, her affidavit made no mention of them. Instead, it dwelt on the days after her kidnapping, when she was bound and blindfolded and locked up in a narrow closet. Sometimes she was visited by Donald DeFreeze, the SLA’s self-styled “Field Marshal Cinque,” who tape-recorded her pleas to her parents.

Occasionally she was given something to drink, the affidavit stated, and whenever the blindfold was removed, “she felt as if she were on some LSD trip; everything was out of proportion, big and distorted.” Her armed captors threatened to kill her and told her that her family had abandoned her. After a month of such treatment, she could stand up for only a minute at a time before collapsing. She “was in a constant state of fear and terror” and felt that “no one cared whether she lived or died.” Some time later, the affidavit stated, she was forced to participate in the Hibernia Bank holdup; by doing so, her captors told her afterward, she had become a criminal whom the FBI would shoot on sight.

Clouds: Patty had tried to reconstruct the next year and a half, the affidavit stated, but had found it too “painful and terrible.” During that period, she “felt her mind clouding” and, after each meal, glimpsed “all sorts of fantastic shapes and image . . . so that the faces of the kidnappers and jailers appeared to her as weird and horrible masks”; she understood only their refrain, “We are going to kill you.” They also told her that her parents had offered a $50,000 reward for her, dead or alive, and she lived in a “perpetual state of terror.” She began to “experience lucid intervals” shortly before her arrest, however, and returned to San Francisco to make contact with her parents. The very prospect of this, the affidavit said, revived her “distorted condition.” She was restored to sanity only “when her mother, her father and her sisters hugged and kissed her.”

The story was a pathetic one – but was it really Patty Hearst’s? Her lawyers told conflicting stories of how it had been pieced together, and it was couched in an odd thirdperson form. Patty herself had initialed each page and made minor corrections, and a notary said she seemed rational enough while doing so. But her jailhouse demeanor sorted badly with the role of a girl suddenly returned to sanity.

Conversation: Perhaps the biggest blow to Patty’s case came when the court released a taped conversation between her and a former schoolmate who had called on Patty in the San Mateo County Jail three days earlier. Patty’s caller was Patricia Tobin, 21, and Patty told her flatly that she planned to make a statement – either from jail or when free on bail – “and it will be a revolutionary feminist perspective, totally.” In fact, she said, “my politics are really different from way back when . . . so this creates all kinds of problems for me in terms of defense.” When Miss Tobin asked whether Patty was talking candidly to her parents, Patty answered: “I’m not talking to anybody real openly, because it’s too weird, and besides, like they listen in on everything and take photographs.” And she added, “I don’t want to have the bail thing where I’m a prisoner in my parents’ house. . .”

It was Patty who first mentioned Steven Soliah, asking Miss Tobin to vist him and hinting broadly that he had been her lover – a fact confirmed by other sources. “If no one sees him, that will be real s—y,” she said. When Miss Tobin asked who Soliah was, Patty explained, “I lived with him. . . I finally got to see him up in the jail. You know, I got to kiss him and then I had to leave to see about my bail. I really wonder if I can help with his $75,000 bail. He can’t possibly come up with it.”

Judge Carter refused to let Patty out on bail or permit her parents to choose the examining psychiatrists. “What you are telling me is to make special rules for Miss Hearst in this case, and that I’m not going to do,” he said. But he did name a medical team: Louis Jolyon West of UCLA’s Dept. of Psychiatry, a behavior-modification expert: Stanford’s Donald Lunde, author of “Murder and Madness”; Seymour Pollack, the Los Angeles psychiatrist who helped the prosecutors of Sirhan by deriding the assassin’s claim that he had been in a hypnotic trance; and Berkeley psychologist Margaret Thaler Singer.

The team’s final report was at least a week away, and probably longer – but her lawyers had already reached their own diagnosis. “She had to be nuts,” said Vicent Hallinan, Kayo’s father and co-counsel. Patty had no remorse, he explained to newsmen, because she remembered no wrongdoing and couldn’t even recall the Harrises, with whom she allegedly lived as a fugitive for months. It was a thin story, and Patty wasn’t much help; at one point she sent out a note asking to see Sunan Jordan, a feminist lawyer who represents Emily Harris. Hallinan forbade the visit Patty also objected to James Martin MacInnis, a lawyer her mother had hired for the case; he dropped out, and was replaced by none other than F. Lee Bailey.

Meanwhile, police and FBI agents were digging deeper into Patty’s life as a fugitive – and finding some new connections. There was, to begin with, the network of friends who had apparently helped Patty and the Harrises: Wendy Yoshimura; Soliah and his sisters, Kathleen and Josephine; James Kilgore, a house-painting partner of Soliah’s and Mary Margaret Turcich, a waitress who worked with Kathy Soliah. A red Volkswagen, abandoned by the fugitives near their farmhouse hide-out in South Canaan, Pa., was a key link: it had been sold by Mary Turcich to a friend of radical sportswriter Jack Scott (page 39) and used by Scott’s wife Micki. The network, said and FBI agent in New York, “opens up a whole new field of investigation. Who are these people? What were they really into? This is the paramount thing right now.”

There were almost too many answers; the investigators were looking into practically every unsolved crime in California, including nearly 30 bombings and a unspecified number of bank robberies. Some explosives and pipe bombs found in the Harris apartment on Precita Street in San Francisco apparently matched materials used in two Bay Area bombings, including the blowing up of a police car. A revolutionary group called the New World Liberation Front had claimed credit for the bombings, and NWLF literature was discovered in the apartment. Nine-mm pistols were found in the Harris apartment and in the Morse Street apartment shared by Patty and Wendy Yoshimura; similar guns had been used in the execution slaying of a Los Angeles policeman and the San Francisco killing last June of Wilbert (Popeye) Jackson, a prison reformer and friend of Sara Jane Moore. The NWLF had boasted of Jackson’s killing, too.

A Blue Bandanna: The most suggestive evidence linked the fugitives to a bank robbery last April in Carmichael, a suburb of Sacramento. The robbery, which netted $15,000, was pulled off in SLA fashion by three men taking directions from a woman in a green coat and blue bandanna. For no apparent reason, they gunned down a woman bystander; in escaping, they dropped several rounds of 9-mm ammunition – bullets that are being compared with ammunition found in the two apartments. A $1 bill found in Patty’s apartment was traced to the bank; by one account, police also found a green coat and blue bandanna there. The bank robbers’ abandoned getway car had fingerprints identified as James Kilgore’s, and the Harris apartment contained an NWLF communique claiming credit for the bank job.

There were other, more shadowy clues as well. An FBI source said that a search of the Harris apartment had turned up “a lot of stuff” that indicated their itinerary. Another find was a seven-page letter in Yoshimura’s writing suggesting an ideological split between the Harrises who favoured violence; and Patty and Wendy, who didn’t.

California Split: Any such suggestion of dissension in the ranks would be a boon to Patty’s lawyers, scrambling tirelessly to dissociate their client from the SLA and all its works. What was uncertain was whether she herself wanted to be set apart. Even in the radical community, the tactical advice was divided; one faction urged “Sister Tania” to adopt “the tactics of silence and wait until her family’s lawyers could bail her out. Another exhorted her to be “bull-headed” and to refuse to go along with the plea of insanity.

There was only one inkling of how Patty was behaving while she waited for the results of her psychiatric examinations. That came late in the week, when her parents called at the San Mateo County Jail for a 30-minute visit. They walked out after half the allotted time and Patty’s mother was grim-faced when she left. 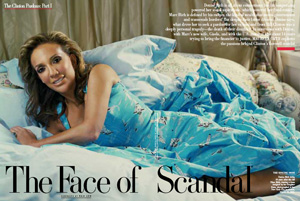 The Face of Scandal: Bill Clinton, Marc and Denise Rich