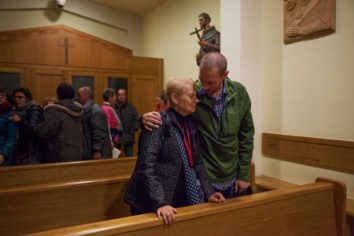 For the Terminally Ill, Drawing Strength From the Virgin Mary

By Maureen Orth, for National Geographic

Of the four stage 4 cancer victims I met last November when starting my reporting for the December National Geographic cover story about the Virgin Mary, Gregg Laskoski, 37, was the sickest.

His mom, JoAnn—who accompanied him to the village of Medjugorje, in Bosnia and Herzegovina, where the Virgin Mary allegedly has appeared to six poor shepherd children beginning in 1981—told me that Laskoski was “end stage.” He had pancreatic cancer that had spread throughout his body.

After learning his diagnosis, Laskoski had one goal: To have his two-year-old daughter, Evelyn, remember him.

He had decided to go to Medjugorje, which offers hope of healing for throngs of pilgrims every year, at the urging of a friend who was supposed to go with him but dropped out at the last minute. So his mother went instead.

“I never met a fighter like that in my life,” says Greg Boyle, an equity banker who was part of the group of Boston hockey dads and friends I joined in Medjugorje. “He would set a goal and nail it.”

We were there at the invitation of Arthur Boyle (no relation), who in 2000 experienced in Medjugorje what he considers a miraculous cure from stage 4 kidney cancer and now leads annual trips to the site.

Laskoski was a lab archaeologist who had wanted to teach history. He died on November 2, All Souls’ Day, exactly one year to the day after we had randomly come together in Medjugorje. What a transcendent year he had, and what lessons he and his family taught the rest of us.

By the time he’d gotten to Medjugorje, Laskoski had already experienced a miracle of sorts. Two nurses, named Angel and Hope, performed CPR on him for 55 minutes and brought him back to life in February 2014, when his wife, Loren, found him collapsed on the hospital floor after his first chemo treatment. He endured a three-day induced coma amid his family’s fears he might never come out of it.

But as soon as he could, he wrote on a chalkboard to his mother, “I want to com…”

“I want to comunicate [sic] that I love you.”

After learning his diagnosis, Laskoski had one goal: to have his two-year-old daughter, Evelyn, remember him.

His astonished doctor told him, “You are Lazarus.”

Although Laskoski had lost his Catholic faith in college, he immediately asked his mother to summon a priest, telling her, “Mom, I remember nothing, but when I woke up, I felt the Holy Ghost sitting on my heart.” He also wanted his daughter baptized.

During our Medjugorje stay, JoAnn marveled at his newfound strength. After previously spending most of his days sleeping, Laskoski managed to climb rocky Apparition Hill to the spot where the visionaries first reported the appearance of the Virgin Mary. He sobbed into his Boston Red Sox cap as he prayed.

He also made it in the rain up slippery Cross Mountain, where a giant crucifix had been erected. As soon as he arrived, the rain stopped, and a rainbow appeared. His presence spread joy to everyone.

I saw Laskoski in July at a barbecue and Mass at the Cohasset, Massachusetts, home of Michael Hughes, 51, a doctor who had stage 4 prostate cancer. Both men were upbeat. They told me they were completely at peace with God and no matter their fate, what the Virgin Mary at Medjugorje had given them was this incredible support group of men they went to Mass and prayed with—guys who also took Laskoski to basketball and baseball games.

“Doc” Hughes died in September. (Of the two stage 4 women who were with us, one now shows “no evidence of disease,” and the other is still undergoing treatment.)

In August, JoAnn phoned Greg Boyle to say her son was not doing well and was in a hospice center. Boyle, who credits Medjugorje and Laskoski with making him a better husband and father, went to visit him with another Medjugorje alum.

At that very moment he’d been asking God for a sign that he was listening.

When they opened the door, Laskoski burst into tears. He later phoned to explain that at that very moment he’d been asking God for a sign that he was listening.

Laskoski’s arms had swollen to twice their size from blood clots. The doctors said he was in no condition to take a plane to Florida so that his mermaid-obsessed little girl could see the Weeki Wachee Springs mermaids perform. He checked himself out anyway and went, his trip paid for by the Jack & Jill Late Stage Cancer Foundation, which grants wishes for families of the terminally ill. Little Evelyn was overjoyed.

We all got an invitation to his church wedding in Boston on October 3—“a humble affair,” Laskoski said it would be. (He and Loren had been married by a justice of the peace eight years ago.) That’s when the Medjugorje guys really swung into action. Somebody knew the managers of Boston’s Lenox Hotel. Rooms for the family and a reception space were secured, as were a DJ, a photographer, a cake, a new suit for Laskoski—the works. With his whole extended family hugging one another and holding Evelyn, they surrounded Laskoski and Loren in a circle of love as they tearfully took their first dance. 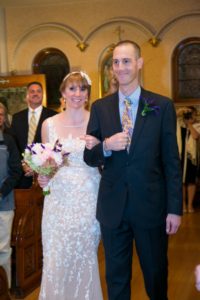 A couple of weeks ago, Laskoski asked everyone to gather to say goodbye. He was suffering a great deal, unable to keep food down, vomiting constantly. He had lost 30 pounds. Nevertheless, his eyes were on fire.

“Listen, guys, I want to thank you for your friendship and what you have given me. I want you to talk to me when I’m gone. I want you to look up to the sky and talk to me, and I promise I will try to send you a sign I’ll be there for you.”

But there was one more thing to be done. On Halloween, in a wheelchair pushed by his father, Laskoski went trick-or-treating with his precious curly-haired Evelyn dressed as Princess Leia.

She knows she will never see her daddy again, but she has the stuffed animal they made together. When she presses its paw, her father’s voice says, “Evelyn, this is Daddy. I love you very much.”

Gregg Laskoski gave all of us a lesson in what miracles are made of. 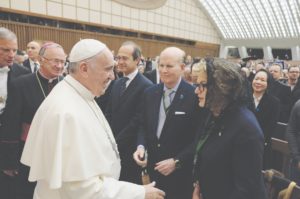